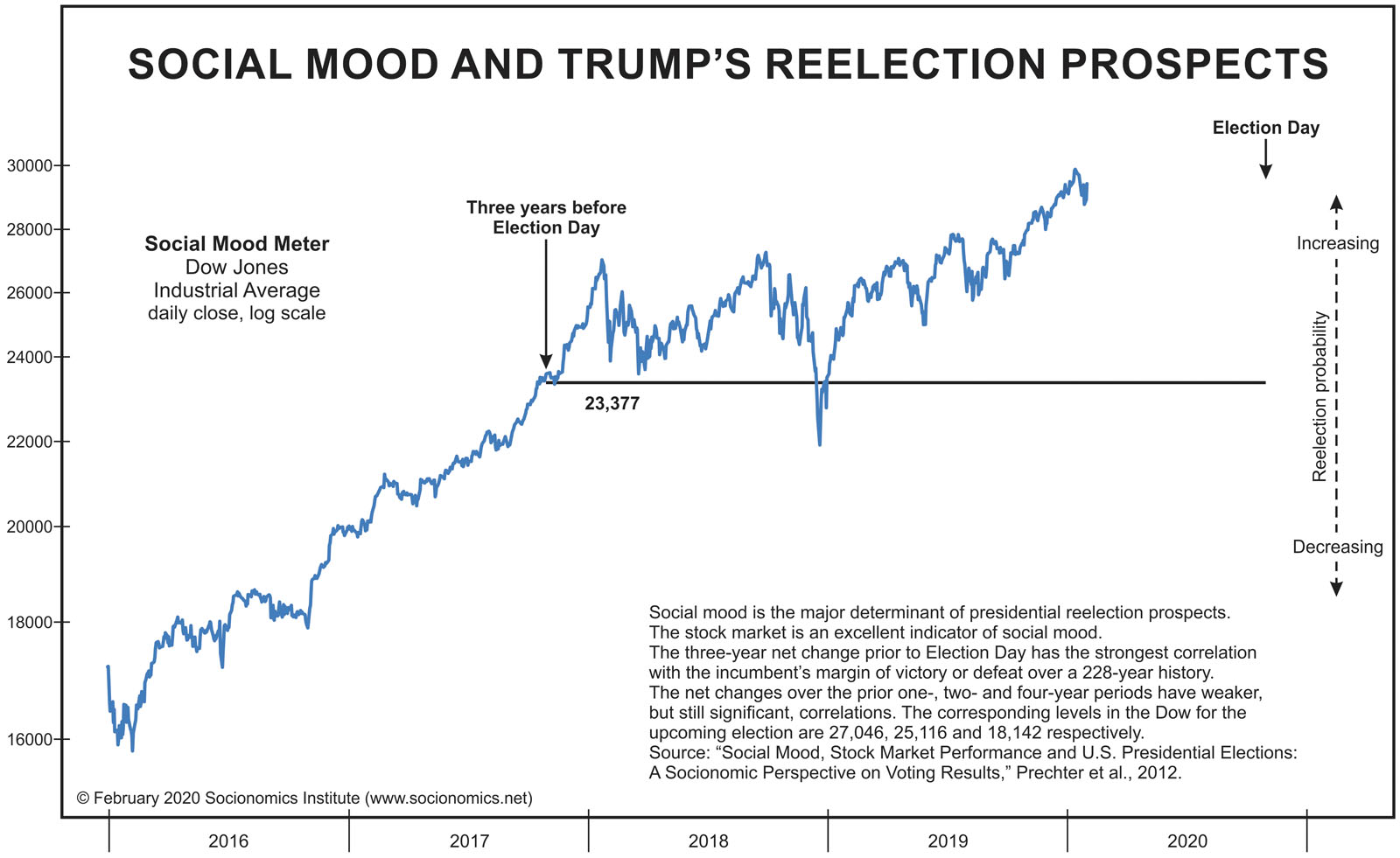 Will Trump Be Reelected? Ask the Stock Market

The stock market is a more powerful presidential reelection indicator than GDP, inflation and the unemployment rate combined. That was the key finding of a 2012 paper by our team at the Socionomics Institute.

Specifically, we found that the net change in the stock market in the three years leading up to Election Day had a highly significant statistical correlation to the incumbent’s margin of victory or defeat. The market’s net changes over the one, two and four years prior to the election were weaker, but still significant, reelection indicators.

The study examined every presidential reelection bid going back to George Washington’s run for a second term in 1792. Regardless of whether we studied elections from the 18th, 19th, 20th or 21st centuries, the stock market remained a reliable, powerful and significant indicator of presidents’ fates at the ballot box.

You might think that the results indicate that voters vote their pocketbooks—or at least their portfolios. But we found differently. Almost no one owned stocks in the 1700s, 1800s or even early 1900s, yet the stock market remained a reliable reelection indicator. We used Robert Prechter’s socionomic theory of social mood causality to explain our results.

The theory proposes that waves of social mood regulate the ups and downs in the stock market as well as other social attitudes and actions, such as the propensity to retain the leader. As social mood becomes more positive, society sends stock prices higher and becomes more inclined to reelect the leader, and vice versa. Thus social mood, not the stock market per se, regulates society’s inclinations to keep the incumbent or throw the bum out.

An interesting example of this causality is the experience of Richard Nixon, who was reelected in a landslide in 1972 in a positive-mood environment near the top of a roaring stock market rally. He was then hounded from office less than two years later in a negative-mood environment, near the end of what was then the greatest stock market slide since the Great Depression. More recently, President Barack Obama won reelection after a vigorous rally in stocks over the three years preceding Election Day 2012.

What about elections that feature no incumbent candidate, such as the one in 2016? In those cases, we found no reliable historical relationship between the stock market and the performance of the incumbent party’s candidate. The same result held when we used GDP, inflation and unemployment as reelection indicators. As we explained in the paper, “When no candidate in a presidential election is the recognized leader whom voters have unconsciously credited or blamed for their mood, they appear to base their voting decisions substantially on other factors.”

The chart above shows the level of the stock market three years prior to Election Day 2020 relative to its current level. While the stock market’s level presently suggests the odds favor a reelection for the incumbent, a lot can happen between now and November 3, 2020. We plan to update the chart as Election Day approaches. Stay tuned.

What about the president’s acquittal in the impeachment trial? Follow this link to get our take.