The Fed Follows the Market Yet Again

By Alan Hall | Excerpted from the January 2019 Socionomist

For more than two decades, Elliott Wave International has tracked the relationship between interest rates set by the marketplace and interest rates set by the U.S. Federal Reserve. All along, the marketplace has led, and the Fed has followed. That relationship continues today. And, because social mood greatly influences markets, it ultimately influences the Fed. The January 2019 issue shows the evidence. Read an excerpt below.

Many people believe the Federal Reserve regulates the U.S. financial system and the broader economy via changes in its benchmark interest rate. But data do not bear out this conclusion, despite the near-mythical appeal of the idea to investors and financial media.

For more than two decades, analysts at Elliott Wave International and the Socionomics Institute have showed data that indicate the Fed does not even control interest rates, the premise behind the conventional Fed-as-potent-director assumption. Both recent and historical evidence shows that the T-bill market moves first, and the Fed rate follows.

Figure 1 plots the Fed’s funds rate versus the freely-traded 3-month U.S. T-bill yield. This chart makes it clear that the Fed consistently follows the T-bill market. This same dynamic is evident in all of the charts in Chapter 3 of The Socionomic Theory of Finance (STF), which cover bond market and central bank moves in the U.S., EU, the UK and Australia. 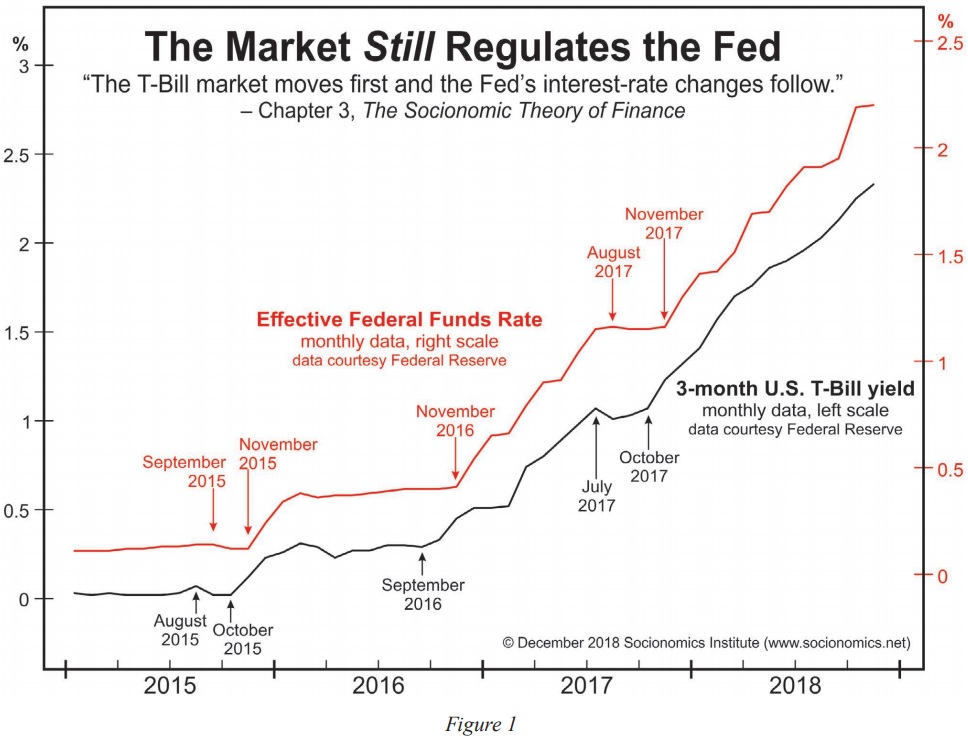 Financial media have grown dependent on Fed analysis for much of their content. It is a popular topic, as it provides a comforting (to the neocortex, anyway) explanation for market moves. For example…