Are Trump’s Days in the Oval Office Numbered? Watch the Stock Market

Why? History shows that the stock market is a useful indicator of people’s attitudes toward the president. Socionomic theory proposes that society’s overall mood regulates both stock prices and the public’s perceptions of its leaders. Positive social mood makes society feel optimistic, bid up stock prices and credit leaders for their good feelings. Negative social mood makes society feel pessimistic, sell stocks and blame leaders for their bad feelings.

These tendencies are evident in presidential re-election outcomes. Presidents Hoover and Carter, for example, lost bids for re-election during trends toward negative social mood as reflected by declining stock prices. In fact, the stock market is a better re-election indicator than inflation, unemployment and GDP growth combined, as my colleagues at the Socionomics Institute demonstrated in a 2012 paper.

Social mood’s influence is also evident in the results of U.S. presidential impeachments and near-impeachments. Twice in history, the U.S. House of Representatives has voted to impeach a president. In both cases, social mood was trending positively, as reflected by rising stock prices, and in both cases, the Senate voted for acquittal. 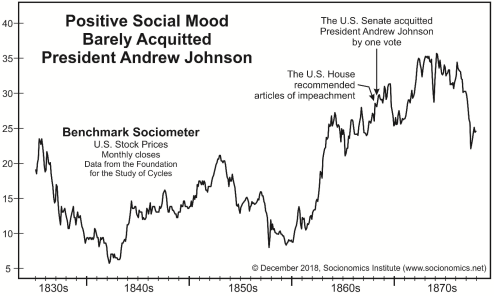 Figure 1 illustrates the timing of the first presidential impeachment. On March 2, 1868, the House of Representatives formally agreed to eleven articles of impeachment against President Andrew Johnson. The Senate took three separate votes, and each fell one vote short of the two-thirds majority necessary to remove Johnson from office. The Senate acquitted Johnson on May 26, 1868, during a stock rally that added to the 250% increase since October 1857. 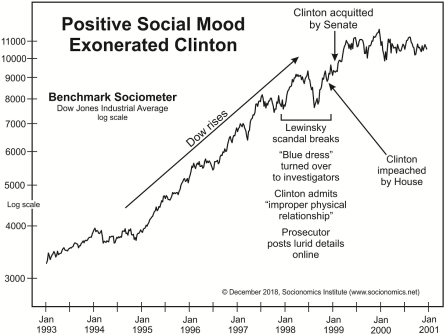 Figure 2 shows that a substantial trend toward positive social mood preceded President Bill Clinton’s impeachment in the House and subsequent acquittal in the Senate. Note that some of the most serious events in the Monica Lewinsky scandal coincided with the largest downturn in the Dow during Clinton’s presidency. Yet, as the Dow recovered, so did Clinton’s approval ratings. And despite a $70-million prosecution of Clinton’s related perjury and obstruction of justice charges, the Senate acquitted the president as positive social mood lifted the Dow, Dow/gold and Dow/PPI to important peaks. 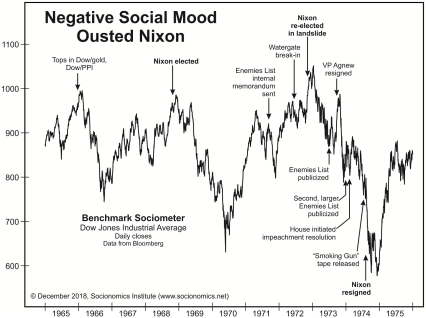 President Richard Nixon’s near-impeachment and resignation from office serves as a textbook case of how social mood influences the fortunes of public figures. Figure 3 shows the Dow Jones Industrial Average surrounding his time in office. The soon-to-be-infamous Watergate break-in occurred toward the end of a strong 67% rally in the Dow from May 1970-January 1973. That trend toward positive mood helped Nixon win re-election in a landslide. But as mood trended toward the negative, the public’s view of its leader darkened, its appetite for scandal increased, the investigation accelerated, and Nixon’s fortunes changed. With almost certain impeachment looming, Nixon became the first president to resign from office on August 9, 1974. 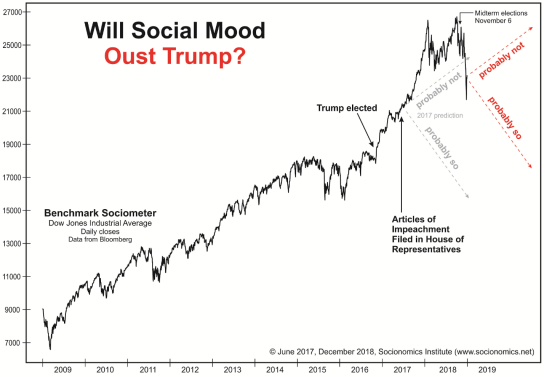 What does this history tell us about the probability that President Trump will serve a full term in office? We considered this question in the June 2017 issue of The Socionomist. Figure 4 is a chart from that issue, updated to the present. It depicts the trend of social mood as reflected by the Dow. We left the gray arrows showing our 2017 analysis in place, and we added red arrows to indicate the possibilities going forward. In July 2017, Congressman Brad Sherman formally introduced an article of impeachment against the president in the House of Representatives. Yet as the market rose during 2017, President Trump—despite low approval ratings, tremendous staff turnover, unrelenting criticism from the political left and numerous indictments and charges of Trump associates in the ongoing Mueller investigation—did not face an impeachment vote. After the stock market peaked on January 26, 2018, however, the tone changed, and even some on the political right became more critical of the president.

Since the October 3 stock market peak, disapproval of the president has grown steadily louder and more strident. At the same time, the Mueller investigation has implicated more and more of the president’s inner circle in illegal activities. The Democrats won control of the House in the 2018 midterms. A November 26 Gallup poll revealed Trump’s disapproval rating had hit an all-time high. On December 10, Fox News’s senior judicial analyst Andrew Napolitano said Trump could be charged with “three separate crimes and could be indicted while serving as president.” By December 17, the Mueller investigation had issued more than 100 criminal counts and charged 34 people, 10 of whom have been found guilty. That same day, Wired published its list of “All 17 (Known) Trump and Russia Investigations” and said, “it’s increasingly clear that, as 2018 winds down, Donald Trump faces a legal assault unlike anything previously seen by any president.”

In the weeks since the Trump Foundation agreed to dissolve, and Secretary of Defense James Mattis and diplomat Brett McGurk have resigned. On December 24, Time reported, “National Christmas Tree to Stay Dark During Holiday Due to Government Shutdown,” and several news organizations ran stories with versions of The Atlantic’s headline, “President Trump’s Nightmare Before Christmas,” as the stock market plunged. Of course, stalwart supporters of the president remain. Yet the number of oppositional voices is rising. A December 19 NBC News/Wall Street Journal poll found that 41% of Americans favor impeachment hearings.

We don’t know what the Mueller investigation will ultimately reveal, but for Trump, the facts may not matter as much as the social mood. Fasten your seatbelt and keep your eyes on stock market indexes, our best reflection of the trend of social mood.

Alan Hall is a senior analyst at the Socionomics Institute and writer for The Socionomist.


2 Ways to Start Your Membership

"I can't believe it." "Who would have thought?" "Did you ever think we'd see THIS?" "I wish I'd seen THAT coming!" "That" could be anything. Radical politics. A crazy fad. Voter polarization. A sudden shift in purchasing behavior at your business. The emergence of a massive new industry. A war breaks out. Another ends in a truce. Whatever it is, any unforeseen change in our society's order can outrage you, shock you, awe you, present you with opportunities and risks. It can leave you searching for answers. What if you could have the answers -- objective, evidence-based, well-researched answers? Imagine scrolling through the news, nodding and saying, "THAT makes sense," and "THAT is right on time." Imagine becoming that unusual person who understands what truly drives today's events; who calmly anticipates change; who welcomes change -- to profit by it and to protect others from it. You CAN become this person -- by putting an exciting new behavioral approach at your fingertips. We call it, the Thinking Person's Membership.

The new science of socionomics starts with a simple observation: How people FEEL influences how they will BEHAVE. At the Socionomics Institute, we look at how the whole society is feeling today -- so you can anticipate how society will behave tomorrow. Using various indicators, we track social mood in real time across the globe. You'll see how the changing social mood drives shifts in everything from the songs people want to hear to the leaders they elect; from people's desire for peace to their hunger for scandals. This is a rare, awe-inspiring insight. It's what enables the Institute to help our members stay ahead of new trends that surprise almost everyone else. Your Thinking Person's Membership gives you this unrivaled perspective and puts you miles ahead of the herd.

YOUR PATH TO UNLEASHING SOCIONOMICS IN YOUR LIFE

As a premier member, you put to work for you everything the Institute's socionomists produce the minute we produce it:

The mainstream cannot bring you these insights. Not because they don't want to, but because they simply aren't equipped to do so.

You have 2 easy ways to start your Thinking Person's Membership

You get everything the Institute produces in a year.

Note: Orders are fulfilled by Elliott Wave International on behalf of the Socionomics Institute