What Can Time Magazine’s Person of the Year Tell You About the Stock Market?

A lot, as shown in this brief excerpt from the new book, Socionomic Studies of Society and Culture.

For its 2006 “Person of the Year” cover, Time magazine chose no person in particular but an abstract internet user: “You.” Immediately we recognized that this cover, celebrating all of humanity, echoes the “I love everyone” spirit that we identified in our 1985 report, “Popular Culture and the Stock Market,” as a hallmark of positive social mood extremes, and thus positive extremes in the stock market. Then we read the following lines in an Associated Press report (December 16, 2006):

It was not the first time the magazine went away from naming an actual person for its “Person of the Year.” In 1966, the 25-and-under generation was cited; in 1975, American women were named; and in 1982, the computer was chosen.

Figure 1 shows that each of the years in which the magazine refrained from identifying a particular person or persons followed (by no more than 12 months) a major turning point in social mood and the market. The 1966 cover, issued at peak positive mood, was an expression of inclusionism and a focus on youth. As Prechter’s Perspective noted, “In every field, women gain dominance in bear markets,” and the 1975 cover, published one year after the December 1974 bottom in the stock market, highlighted this theme by celebrating “American Women.” Time’s cover of 1982, issued at the end of the 16-year bear market in PPI-adjusted terms, featured an inanimate object as Person of the Year, reflecting the feeling of alienation that attends extremes in negative social mood. The magazine’s editors were apparently unable to reach a consensus on awarding the title to any member of humanity. Without doing it consciously, Time’s editors may once again be reflecting the mood of a significant turning point—this time a peak—by honoring the collective “You.” 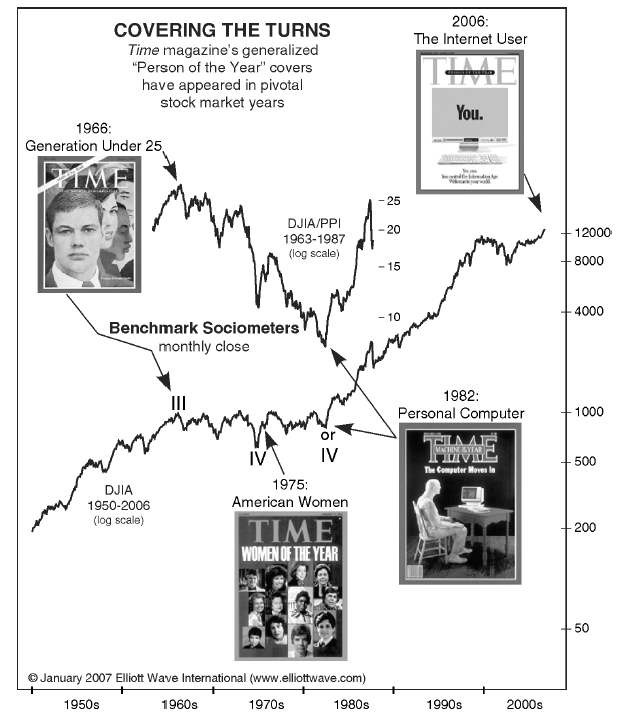 Suppose you could understand why some celebrities seem to rule the airwaves and movie screens one minute, yet are catapulted to obscurity the next. And why genres of TV shows become popular overnight. How and why trends fluctuate in the attendance of sporting events. Socionomic Studies of Society and Culture rewrites the book on what makes pop culture popular. Each chapter unveils how you can understand--and sometimes even anticipate--trends from fast cars to superstars, and from sex to the cineplex.

The book is just one of the resources you get instantly when you become a socionomics member.

The science of socionomics starts with an indisputable observation: How people FEEL influences what they DO. If you know how someone is feeling, you have a leg up on predicting how they will behave.

We zoom out. We look at how society is feeling so that we can understand--and even anticipate--how society behaves. As we track social mood in real time across the globe, we chart how its changes produce shifts in everything from the songs people want to hear to the leaders they elect to their desire for peace to their hunger for scandals to the trajectories of their stock markets, and more.

This is the great insight. It's what enables the Socionomics Institute - and its members - to stay ahead of all others.

Each month the Institute's analysts show members how today's - and tomorrow's - most important trends will unfold. They give members an unrivaled perspective on the future, putting them miles ahead of herd.

As a member, you get everything the socionomists at the Institute produce, so you don't miss a single insight. You get...

For a limited time, we've created two easy ways for you to become a member.

Note: Orders are fulfilled by Elliott Wave International on behalf of the Socionomics Institute