By Alan Hall | Excerpted from the October 2017 Socionomist

2017 was a home run year on the baseball diamond and in the stock market. Homers, strikeouts and stocks reached record highs. In this excerpt from the October 2017 Socionomist, Alan Hall details how social mood has regulated trends in baseball and stocks for nearly 150 years.

Socionomists have long noted the influence of social mood on baseball trends and even forecasted their progression. Robert Prechter first drew a connection between baseball, stocks and social mood in the 1985 report “Popular Culture and the Stock Market.”

In the November 1992 issue of The Elliott Wave Theorist, Peter Kendall observed intense positive emotion surrounding the 1991 and 1992 World Series. Yet he also noted a turn toward cynicism with respect to other aspects of the game. He surmised that these developments were early manifestations of a coming “major disaffection” for baseball among the public.

Three months later, Kendall updated his analysis and showed a completed Elliott wave advance in nearly a century of baseball game attendance. He forecast, “At minimum, then, baseball faces its largest percentage drop in attendance since it became the national sport.” The following year, a league-wide players’ strike shortened the 1994 season and prompted the cancellation of the World Series. The 1994 season saw “the largest annual arithmetic drop in attendance in the history of baseball.”

But from extremes, trends in the opposite direction begin. Baseball would recapture the public’s imagination in ensuing years, as fans clamored over the chase for home run records in the late 1990s.

The September 1999 issue of the Financial Forecast showed a chart from USA Today that plotted the average number of home runs hit per 100 at-bats in each decade, going back to the 1920s. Kendall added Elliott labels to the pattern and said,

It shows that measured in 10-year spans, the bull market in home runs has traced out a five-wave pattern of its own. … As we have said before, in the cultural realm, the completion of five waves leads to changes in style and performance simply because “it’s time.” Sluggers will tire and stop hitting home runs just as fans become tired of watching them.

As the bottom line in Figure 1 shows, home runs per game registered a high the very next year in 2000 that would stand until the 2017 season. 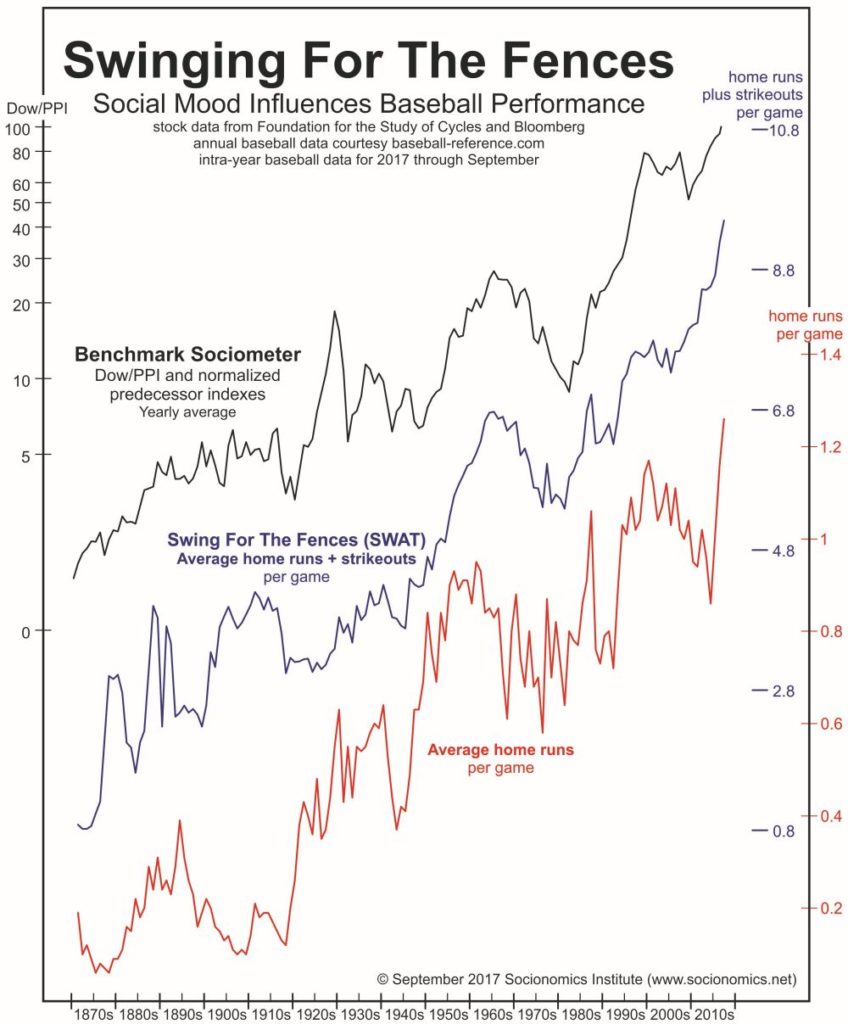 Figure 1 plots 147 years of social mood as reflected by a PPI-adjusted index of U.S. stocks versus two indicators of baseball performance. The bottom line plots average home runs per MLB game. Homers have trended roughly parallel to the Dow/PPI. The relationship is not perfect, however, with notable divergences surrounding some of the major peaks and troughs. Let’s dig a little deeper to capture more completely hitters’ drive to knock a homer.

As a New Yorker article noted, strikeouts are another indication that hitters are swinging for the fences. Accordingly, the middle line in Figure 1 plots average home runs plus strikeouts per game, a new baseball metric which I dubbed the “Swing for the Fences” indicator, or “SWAT”—not an exact acronym, but it’s catchy and close enough. It is primarily a strikeouts indicator, as historically there have been far more strikeouts than home runs per game on average. This performance index has had an even tighter relationship with the Dow/PPI, especially since the 1940s. Today, stocks, SWAT and average home runs per game are at new all-time highs.

The Socionomics Institute’s Socionomic Studies of Society and Culture rewrites the book on what makes pop culture popular. Each chapter in this #1 social theory bestseller unveils how you can use social mood trends as reflected in the stock market to understand–and sometimes even anticipate–developments in areas from fast cars to superstars and from sex to the cineplex. Delightfully fun and seriously useful, Robert Prechter, Alan Hall and fellow contributors will change your view of the world around you. Whether your interests are reflected in Scientific American, The Wall Street Journal, Cosmopolitan, Rolling Stone or Variety, you will find a wonderfully rich world in the field of socionomics. Visit Amazon to order your copy.