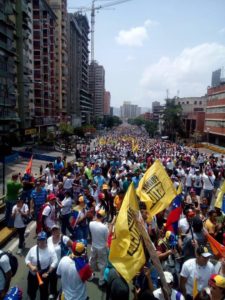 The “Mother of All Protests” showered the streets of Caracas, the capital city of Venezuela, this week against President Nicolás Maduro and his socialist government. It’s the biggest protest in three years. Maduro urged his supporters, the military and local militias to defend the ailing government plagued by rampant inflation and economic recession. As the crisis escalates, many international companies are fleeing the country, and on Thursday, the government unexpectedly seized a General Motors factory.

Negative social mood appears to correlate with a collective increase in discord, fear, depression, malevolence and destructiveness. These manifestations are on full display in Venezuela. Chuck Thompson looked at Venezuela’s plight in the February 2017 issue of The Socionomist.