Why Zika, Why Now? Ask the Brazilian Stock Market 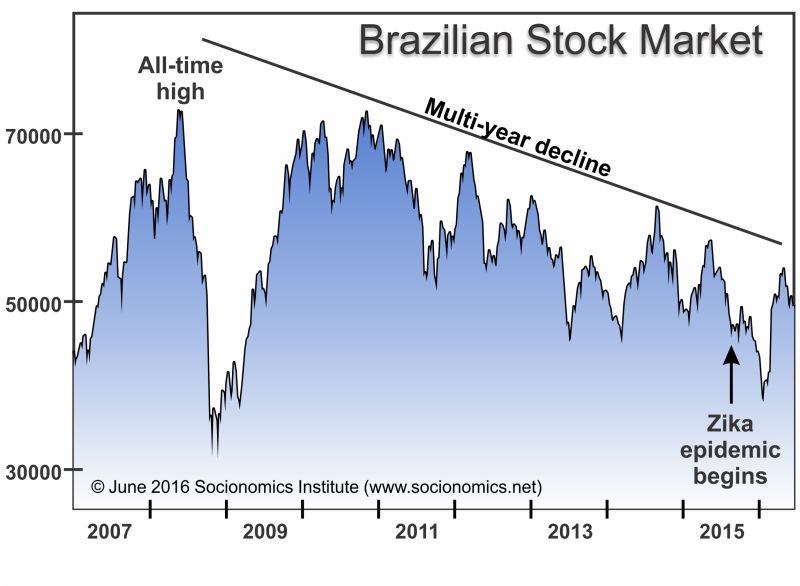 GAINESVILLE, Ga; June 23, 2016 2:33PM—As Zika spreads, the race is on to determine how big a risk the virus poses for the Olympics and whether the epidemic will blow up worldwide. One key is uncovering what’s behind the pathogen’s sudden growth after 69 years of obscurity.

A new study points to an unexpected explanation: a depressed social mood, as indicated by a prolonged downtrend in the stock market in the susceptible region. The study, “Exploring Socionomic Causality of Social Health and Epidemics,” is available for download on the Social Science Research Network (SSRN.com). Download it here.

Researchers from the Georgia-based Socionomics Institute studied nine major epidemics in more than seven countries over three centuries. They found a striking thread. In each case, a severe or long bear market in stocks preceded the outbreak. The Zika epidemic emerged in Brazil after a five-year, 36% decline in the country’s Bovespa Index.

In the past ten years, academics worldwide uncovered a slew of evidence connecting stock market declines to other negative health outcomes, such as strokes, heart attacks, hospitalizations for psychological conditions, firearm-related injuries, cigarette smoking, binge drinking and fatal alcohol-related car accidents. The research offers no consistent explanation for the link between stocks and health.

So, where’s the next epidemic likely to occur? “We can’t predict the exact timing or location of epidemics,” said Hall. “But I can tell you that we are watching the sagging stock markets of Puerto Rico, Greece and Russia very carefully.”

To schedule an interview with the study’s authors, please contact our media relations desk at media@socionomics.net, (470) 892-2049.

About The Socionomics Institute (SI)