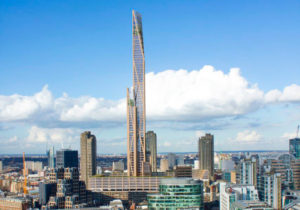 A proposal to build London’s second-tallest skyscraper will not go unnoticed — especially if the design calls for an 80-story tower built from wood.

The proposed Oakwood Tower is “a way to imagine what the future of construction could look like in the 21st century,” says Michael Ramage of Cambridge University’s Center for Natural Material Innovation. He says the design is cheaper and stronger versus a comparable steel and concrete tower, and would also exceed London’s current and fire safety regulations.

“We’ve designed the architecture and engineering and demonstrated it will stand, but this is at a scale no one has attempted to build before.”

In September 2015, Peter Kendall of Elliott Wave International led a walking tour of Wall Street that gave an up-close look at the skyscraper indicator, via stops at many of New York City’s most iconic buildings. He also gave an informative talk on this subject at the 2016 Social Mood Conference on April 9 in Atlanta, Georgia.

In this interview, Peter discusses the uniqueness of the Wave Principle, why psychology repeats itself over time, and offers his favorite cultural trends to study.