By Alan Hall | Excerpted from the August 2015 Socionomist

Protestantism is deeply embedded in American history. Yet over the past seven decades, a shrinking percentage of Americans identify themselves as Protestant, even as a growing percentage express no religious preference at all.

In this fascinating article, socionomist Alan Hall explains that a long-term positive social mood trend has contributed to this secular shift.

Read an excerpt below.

Reverence for religion has waned in the US for more than a half century. This trend makes sense in light of a large-degree trend toward positive social mood. In The Wave Principle of Human Social Behavior (1999), Robert Prechter lists several social polarities, or tendencies in the character of social expression that shift with social mood. He observed that practical thinking and reverence for science tend to become more common during positive mood trends and that magical thinking and reverence for religion tend to become more common during negative mood trends: 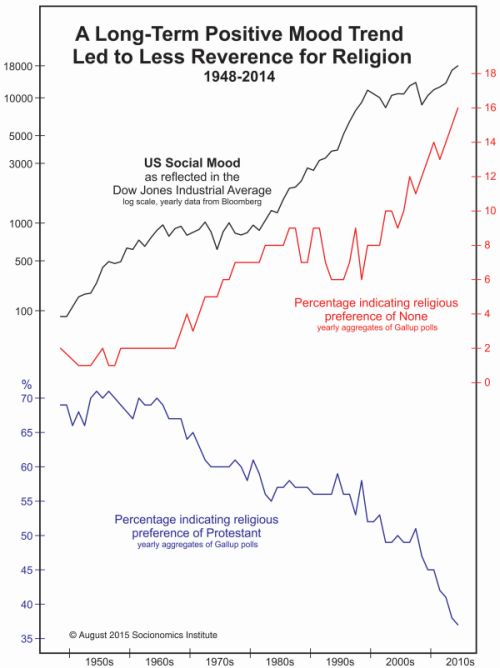 Social mood in the US has trended positively at large degree for most of the past seven decades. Figure 1 plots the Dow Jones Industrial Average versus 67 years of Gallup poll data on religious identification to show the substantial downsizing of America’s Protestant core during that time and the corresponding rise of secularism in society. Not every wiggle on each graph matches exactly, but the long-term trends in the data series are clear.

In the remainder of this concise, three-page report, Hall explains how these changes have affected generations, genders and ethnicities and offers his outlook on how religious belief will shift during the next large-degree negative mood trend.