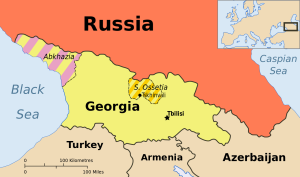 Following the violent 2014 Euromaidan Revolution, Russian forces occupied Crimea and supported pro-Russian militias throughout eastern Ukraine. On July 13, the government of Georgia accused Russia of illegally “placing border markers on the edge of the South Ossetia region” one mile beyond the border.

In 2007, Alan Hall published a socionomic study of Russia and cited two countries in particular that Russia may attempt to “occupy”: Georgia and Ukraine. In the recently published June 2015 Socionomist, he updates that study with a new report titled, “Social Mood in Russia Continues a Dangerous Trend.”

Subscribe to The Socionomist and receive over six years of still-relevant Socionomist archives. It’s risk-free for thirty days.