Editor’s Note: Polls had the 2015 UK General Election at a dead heat. But Charlie Aitken looked at the data socionomically and reached a different conclusion. Based on a substantial rise in the FTSE 100 in the years leading up to the election, he observed that the odds were good for David Cameron’s return to 10 Downing Street. The day before the election, Aitken published the below commentary on https://investmentimer.wordpress.com/.

The below article appears exactly as it ran on May 6, 2015. As a result, it may contain typographical and other errors.

With one day to go until the UK Election Day, the latest opinion poll(s) have Britain’s Conservative and Labour parties tied at 33 percent of the vote, which has barely budged in the two months of campaigning. Further complicating the maths are the Scottish Nationalists, who are poised to trounce Labour north of the border, whilst the anti-EU UKIP appear set to take a lot of Conservative votes in England.

With neither party on course to come close to an outright majority in Parliamentary seats, both will have to negotiate with the other smaller parties to see who can win enough support to form a government. At least that is what the book-makers and the pundits are saying.

Before going out on a limb with a forecast, it’s worth reflecting on the “Socionomic analysis” in respect of politics, as set out by the father of Socionomics, Robert Prechter of Elliott Wave International fame:

As such, researchers at the Socionomics Institute found a solid connection between the stock market’s direction in the three years leading up to Election Day and the election results. Gains of 20 percent or more for the Dow nearly assured victories for sitting Presidents. Drops of 10 percent or worse got them tossed out.

So let’s have a look at the UK’s FTSE All Share Index for any clues:

As can be seen, the Conservative party under Baroness Margaret Thatcher & Sir John Major held power over an 18-year period which coincided with a secular bull market for stocks, albeit it that the ousting of Major in 1997, in the midst of a raging bull market appears to be an anomaly. We would add, however, that UK house prices, which may actually be an equally important barometer to collective social mood, had fallen by 30% during the early 1990’s recession and remained dormant until 1997.

Enter the Labour party, under Tony Blair’s leadership in 1997, with the economic “stewardship” of the state entrusted to Gordon Brown. Between them they held three terms in office, covering a 13-year period, with Blair wisely exiting the hot seat in 2007, lining up Brown to take the flack of the impending financial crisis.

Whereas Major was “unlucky” in respect to the social mood, Blair was able to bask under the late 1990s TMT stock bubble in 2001 and the property bubble that took him through until 2007.

2010 ushered in the first coalition UK Government in decades and this is partially explained by looking at the FTSE All Share in “real terms,” the red line below: 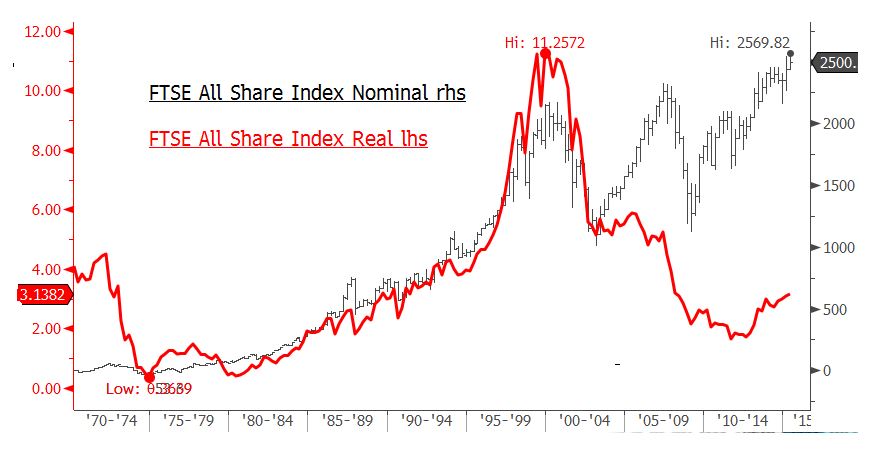 You will observe that it peaked in late 1999, ushering in a “secular bear market,” of which 2000/03 and 2007/09 are parts of it. This explains a host of Socionomic observations, such as the increased polarisation within society, politics included.

As such the current Conservative/Liberal Democrat coalition enters this election after a 6-year bull run for the All-Share in nominal terms and for 3+ years in real terms, which suggests a repeat of the 2010 result.

In other words an echo of the last UK election outcome looks to be good odds?