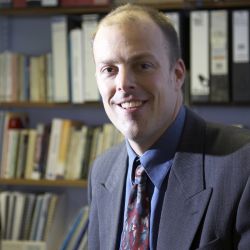 Alex Bentley’s research dovetails nicely with socionomics. He has studied the rise and fall of popular baby names, the history of Russia, decision-making under uncertainty, mood and emotion expression in textual Big Data series and convened a conference on sugar production and consumption. All are topics that socionomists have also explored.

Professor Bentley spoke at the 2015 Socionomics Summit on April 11, 2015 in Atlanta.

Socionomics Foundation: Your undergraduate degree is in physics. How did you become interested in moving from studying the physical world to the social world?

Alex Bentley: I initially enrolled in a graduate program in mechanical engineering, but I decided to go in another direction. There was an opportunity at Cornell to pay my way through graduate school by using my physics training in an archaeology program to do neutron activation analysis of ancient pottery. I ultimately finished my archaeology PhD in the anthropology department. It was anthropology that got me interested in culture and behavior, archaeology that kept me interested in changes over long time spans, and physics that led me into statistical investigations of it.

SF: Some of your early research on social behavior centered on studying trends in baby names. How did that work lead to the work that you are doing now on long-term changes in the emotions expressed in literature?

Alex Bentley: We started out deliberately looking at behaviors that were more frivolous, like baby names and even ancient pottery decorations, to try to understand how fashions drift through time. The best datasets are detailed and follow many different competing choices over a long period. The baby names data were absolutely ideal because they recorded the precise popularity of each of the top 1,000 names across the past century. We learned a lot about cultural drift. You have to remember that we were doing this work a decade ago, a time before “Big Data” were prevalent. As the Big Data revolution began to happen, we felt that we were in a position to expand what we had learned. We capitalized on the opportunity to use the tools that we developed in the baby names project to study word popularity in digital archives. Specifically, the Google n-gram database allowed us to study changes in emotion words over the past century. The trend of literary misery in particular looked just like an inverted economic history of the 20th century, with one catch: it seemed shifted by a decade. This led us to discover that the level of misery that authors expressed in each year of the 20th century essentially reflected an average of the previous decade of economic misery.

SF: Much as social mood trends in the stock market unfold in a fractal pattern, you wrote, “Cultural evolution can be examined at myriad scales, and the scale at which we happen to be operating at any particular moment conditions our perception.” What similarities do you draw between your work and socionomics?

Alex Bentley: I confess that I was oblivious to the power of social mood until recently. We initially tried to see how far we could get with a simple model of random copying to explain fashion changes on many different time scales. We deliberately chose to study baby names, decorations and other behaviors that were both highly copyable and seemed to us not to be overtly emotional. But when we looked at how emotion word usage changed in the 20th century, I was stunned at how clear the patterns were and how strongly they reflected 20th century economic fluctuations. We had published a big paper in the journal Behavioral and Brain Sciences in which we barely mentioned emotions or mood, and several of the thirty academic commentators stressed how important emotions are in decision-making. I then learned from the literature that they were right. I began to appreciate that point even more after I visited the Socionomics Institute and started reading The Socionomist.