By Alan Hall | Excerpted from the August 2014 Socionomist

The World Health Organization says the Ebola epidemic that erupted in western Africa in March 2014 is “the largest recorded outbreak” of the disease. Aside from one case in the Ivory Coast in 1994, the Ebola outbreak is western Africa’s first. Why here, why now?

In this timely article, socionomist Alan Hall explains that a six-year trend toward negative social mood in western Africa created ideal conditions for the Ebola outbreak.

Here is an excerpt of the August 2014 report.

Ebola has a variable incubation period. After infection, a person may carry the disease anywhere between 2 and 22 days before showing symptoms or becoming contagious. Victims bleed, vomit and suffer diarrhea, and the virus spreads via contact with bodily fluids or secretions, including sweat. It may be possible to get the virus simply by touching an infected person or a contaminated object. There is no vaccine, and quarantine is the only way to prevent contagion. But as early as June, health officials expressed worry that many people,

Have already crossed a border and brought the virus to another location. … hospitals are an easy breeding ground for the virus. … Many fear that if it isn’t contained soon, the economic situation will worsen…. Businesses have begun to lose money and economic activity has all but halted.

In truth, and consistent with socionomic theory, the area’s financial and macroeconomic situation worsened before the outbreak. Negative social mood creates conditions conducive to epidemics, and one of the best mood indicators available is a region’s chief stock index. Figure 1 plots the Market Vectors Nigeria-Focused Western Africa Index, which tracks “the overall performance of the largest and most liquid companies in Nigeria and West Africa.” The blue and red lines at the lower right plot cumulative Ebola cases and deaths in Guinea, Liberia, Sierra Leone and Nigeria. Much as we have shown with cholera, Spanish flu, polio, HIV/AIDS, SARS and H1N1 flu, this epidemic followed classic socionomic timing: It erupted after years of a trend toward negative social mood.

Most people assume that social stress follows the fear, chaos and disruption of an outbreak – and some of it does. But most importantly, the data also show that stress precedes epidemics and fosters an environment ripe for the spread of infectious disease. “Ebola May Have Been Smoldering for Years,” reported NBC News on July 20. A research team for the US Army Medical Research Institute of Infectious Diseases looked at blood samples of “253 people cleared of both Lassa and malaria between 2006 and 2008” and found evidence that some of the people had been infected with Ebola and the related Marburg virus. “It had been circulating there for a long time,” said of the researchers. “It just hadn’t gotten out of control or the right conditions weren’t there.” After six years of negative social mod, the right conditions arrived. … 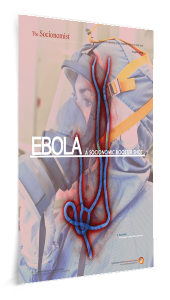 In the remainder of this seven-page article, author Alan Hall: