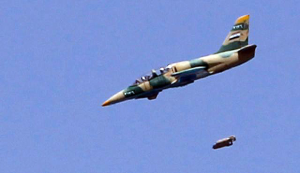 A June 26 report in Foreign Policy magazine says drones from Iran have been secretly flying over Iraq, which is being overrun by Sunni militants. The effort to stop the militants has brought together “strange bedfellows,” including the US, Iran and Syria, which sent jet fighters to Iraq. Meanwhile, Foreign Policy notes that Iran and the US are “watching each other’s actions warily as they jostle for influence in the region.”

To learn more about the prospects for war both now and in the future, click here.