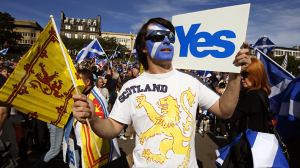 Struan Stevenson, a member of the European Parliament, says a vote by Scotland to leave the United Kingdom “would trigger a wave of secessionist movements” across the European Union. Stevenson is also encouraging Catalonia to forsake independence and stay within Spain, according to a May 19 article in The Scotsman. Both Scotland and Catalonia are scheduled to hold independence referendums later this year.

What’s the connection between secessionist movements and social mood? Click here to find out.