By Alan Hall | Excerpted from the March 2013 Socionomist

[Ed: Expressions of authoritarianism generally increase with the amount of time society undergoes a large-degree trend toward negative social mood.

In this article, Alan Hall explains that a 129-year trend (1720 to 1849) of negative social mood in Britain produced intense British authoritarianism toward the Irish.

From the South Sea Bubble, To “A Modest Proposal” 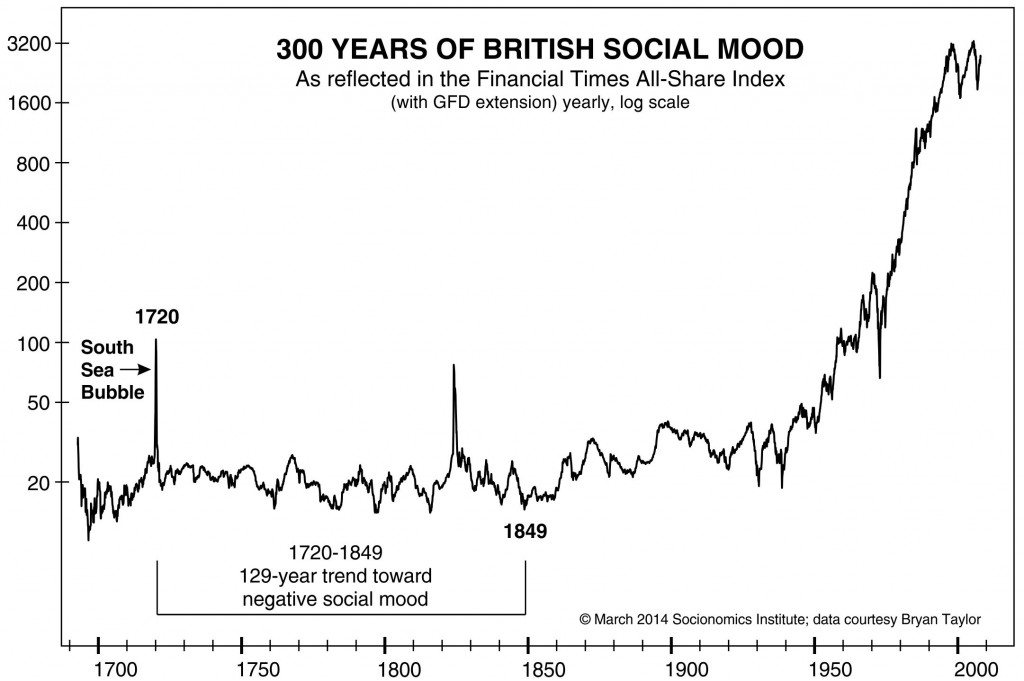 There is a long history of British authoritarianism toward the Irish, which has tended to intensify during large-degree bear markets. The bear market that began in 1720 provides our first example. The November 2009 issue of The Socionomist described the social scene in Britain nine years after the positive social mood extreme in 1720:

Price data and historical events confirm that when modern societies devalue their stocks, they also tend to devalue human life. In the 64-year bear market in Britain following the South Sea Bubble, for example, English society attempted numerous ineffective schemes to fix economic problems and deal with the expanding underclass. These efforts included draconian trade restrictions that worsened the plight of the impoverished Irish. In 1729, Irishman Jonathan Swift satirized the results in his essay, A Modest Proposal, in which he suggested that starving Irish paupers cannibalize their young:

… A young healthy child well nursed is at a year old a most delicious, nourishing, and wholesome food, whether stewed, roasted, baked, or boiled; and I make no doubt that it will equally serve in a fricassee or a ragout.

Nine years into the negative social mood trend, Swift criticized the authoritarian social expression that would gradually intensify for the next 120 years, reaching a tragic extreme in 1849, at an important final low in the FTSE All-Share Index. …

In the remainder of this six-page report, Alan Hall details the harsh British repression of Ireland in the 1800s, which included Irish newspaper publishers convicted of treason, the suspension of habeas corpus that led to imprisoning Irish people without trials, forced evictions of starving tenant farmers and a huge rise in mortality among the Irish.