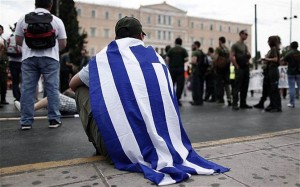 Negative social mood continues to wreak havoc on Greece, whose ASE Index is down 86% since October 2007. A February 22 article in The Greek Reporter says 28% of Greece’s population is unemployed. The Greek government has cut spending and raised taxes. And, the average Greek’s income has declined by 40 percent. In addition, mental health data indicate that major depression rates in Greece have risen 50% since 2009, affecting more than 12% of the country’s population in 2013.