[Mood Riffs] Secessionism Boils Over in Scotland, Simmers in California 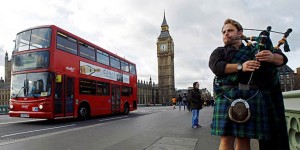 Scotland’s first minister, Alex Salmond, has accused the UK government of being “thieves” who plunder Scotland’s oil and gas reserves, according to a February 24 article in The Independent. Scotland is set to vote on independence from the United Kingdom in September. And in the US, the state of California has given venture capitalist Tim Draper the go-ahead to collect signatures on a petition to break California into six separate states. Draper has until July 18 to collect more than 800,000 signatures. If he is successful, a vote on his proposal could be held in 2016.

To learn more about the connection between secessionism and social mood, click here.