Negative social mood trend has been sharply rising for months in Ukraine. This past weekend the US media finally paid attention.

A few stories had noted the Nov. 28-29 European Union Summit in the Lithuanian capital of Vilnius. Ukraine’s President Viktor Yanukovych had long said the summit was the time and place he would sign an economic integration pact with the European Union. He attended but did not sign.

Frequent threats from Russia — including one to Ukrainian statehood, another from Vladimir Putin that Ukrainian borrowers owe $28 billion to four Russian banks — were the main reason for Yanukovych’s loss of nerve.

Large political demonstrations followed in Kiev on December 1, and riot police used violence against protestors. An even angrier public then assembled in a rally of some 350,000 people, the largest protest since Ukraine’s “Orange Revolution” in 2004.

On December 8, between 500,000 and one million protesters gathered in the center of Kiev. The crowd toppled a statue of Lenin, and their loudest chants demanded that Yanukovych to resign.

The EU and Russia have each accused the other of applying unacceptable pressure on the Ukrainians. Both want formal economic integration with that country and its 46 million citizens. But, what Russia and the EU have done in fact is further destabilize Ukraine’s already precarious political and financial condition.

The current Ukrainian government has overseen two years of near-zero GDP growth (Q3 was negative growth), a stock market in its third year of deep losses, months of falling bond prices/rising yields, and a dwindling currency reserve. Now that government finds itself starkly at odds with much of its citizenry. Far from having provoked a “sudden” loss of confidence, the outcome of the summit was the spark that ignited already rising public resentments.

Geography is the major subplot in this profoundly unstable mix. EU economic partnerships already include former Eastern Bloc states such as Poland and Romania — now the European Union wants to extend partnerships not only to Ukraine but also to five other states (such as Belarus and Georgia) that were actually territories of the old Soviet Union. 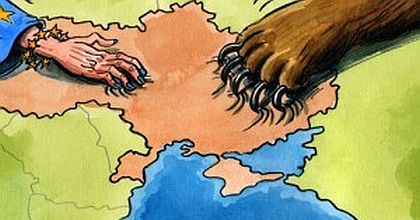 For Russia this would be a loss of economic influence across its entire western border. That prospect is clearly intolerable to Putin, thus his overt public threats and bullying.

Negative mood is now driving Ukraine’s politics, foreign relations and financial system (its stock market is down some 75 percent). The country is wedged economically and geographically between West and East — and its neighbor to the east is particularly unlikely to tolerate much more instability before intervening.

We’ll be following social mood as it unfolds in this potential center of a new Cold War. For more on social mood, the debt crisis and the European Union, read this excerpt of Chuck Thompson’s “Disunity in Europe” article from the January 2012 Socionomist.