[Article] Grinners and Grouches: Social Mood Can Be Evident in Facial Expressions

[Ed: In this fascinating video, socionomist Alan Hall explains that the emotion displayed in faces may be a useful kind of sociometer and improve predictions of crowd behavior.

Faces May Reveal Social Mood
Chapter 14 of The Wave Principle of Human Social Behavior (1999) lists many behaviors and emotions that people tend to display in response to social mood. Let’s look at the two poles of one of those categories, “Confidence versus Fear.”

Here’s a snapshot of FDR & Co. in 1933 as they signed Glass-Steagall [below], which separated the financial sector into safer, deposit-taking commercial banks and risk-taking investment banks. 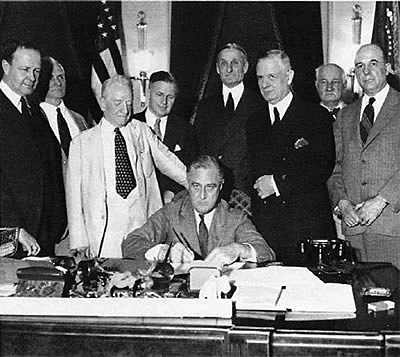 Negative Emotions: FDR & Co. in 1933 as they signed the Glass-Steagall Act.

And here’s a photo of Bill Clinton & Co. repealing Glass-Steagall in 1999 [below], with the passage of the Graham-Leach-Bliley act known as the Financial Services Modernization Act.

It’s a simple story. The first group was in the grip of extremely negative social mood in 1933. Of the nine visible faces in the first group, the tallest man in the center is the only one who might have been smiling. In contrast to him, President Roosevelt “had the look of one who had drunk the cup of life and found a dead beetle at the bottom,” to quote the 1930s humorist, P.G. Wodehouse.

The change in social mood from 1932 to 1999 was evident not only in stock prices and the radical shift from restrictive financial regulation to permissive deregulation, but also in the emotions revealed on the legislators’ faces. …

Click the link below to see the entire video issue. You will learn how a photo of Canadian hockey fans foretold the 2011 Vancouver Stanley Cup Riot.  You will discover how universities and the federal government are using facial recognition and analysis technology to measure human emotion and identify people.