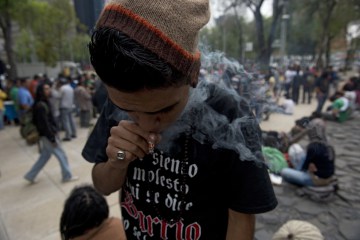 The largest North American city intends to legalize marijuana. No, not New York City. Emulating bills passed in Uruguay, Washington and Colorado, Mexico City legislators will file a proposal to legalize and regulate marijuana consumption. The chief architect of the Washington state law told Time Magazine, “I have seen a sea change in thinking. People are no longer asking if it can be done, but how it can be done.” A number of Mexican lawmakers and celebrities support the effort, including former President Vincente Fox.

If you look closely, you can see patterns in social mood that help you predict social behaviors. To learn more about our flagship publication, The Socionomist, Click here >>