Occupy Wall Street is dead, according to the New York Times, “an asterisk in the history … a fad.” The movement was once a “media frenzy” celebrated as America’s “Arab Spring,” and Time magazine chose “the protester” as Person of the Year. But now, critics say Occupy put no Wall Street fat cats behind bars nor spurred any toothy bank regulation. Even the famous 99% is diluted to 47%, the number Mitt Romney accuses of paying no income taxes and freeloading on the government dole. “The thrill is gone baby. The thrill is gone away.”

Monday’s Occupy protests were “a shadow of its mighty infancy,” according to CBS. One protester complained the demonstrations caused him to miss a job interview. What happened to Occupy? The same thing that happened to the Tea Party movement (which is now less popular than Muslims, atheists and 21 other groups, according to a poll last month), social mood changed. The May 2011 issue of The Socionomist charted the phenomenon, “Increasingly positive social mood has altered the political forces that were so favorable to the Tea Party two years ago.” Here’s a quick chart of Occupy vis a vis the lens of social mood.

Free excerpt:  More about this topic >> 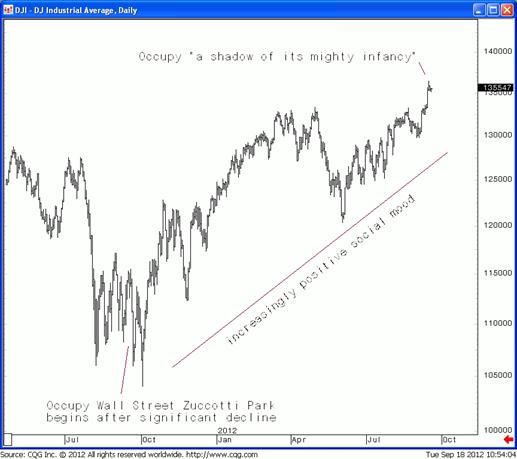