Study Confirms That Herding Undermines the Wisdom of Crowd Effect

Scottish journalist Charles MacKay1 got it right in 1841; crowds are mad. And now we have evidence from the laboratory.

A new study, “How social influence can undermine the wisdom of crowd effect,” by Jan Lorenz, Heiko Rauhut, Frank Schweitzer and Dirk Helbing, provides important support for socionomic theory. It confirms that social interaction and resulting herding severely undermine the utility of the wisdom of crowd effect (WCE). The experiments show that WCE is reliable only when it derives from the aggregated knowledge of independent individuals. 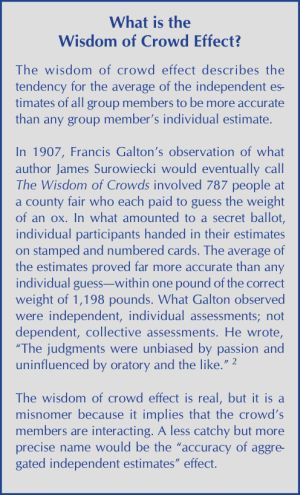 In other words, it is useful only when crowds are not acting like crowds at all.

The study shows that “even mild social influence” is sufficient to undermine the utility of WCE. It also provides the important new finding that social interaction produces convergent opinions and undue increases in confidence in those opinions. The results support the socionomic case that herding is a major factor behind asset pricing.

When Does Wisdom Become Madness?
Here’s a summary of the findings:

Interacting crowds exhibit convergent opinions even when there are factual answers to questions. Socionomic theory posits that when there is no objective answer to a question, such as, “What is this stock really worth,” social interaction further amplifies the convergence of opinions. In financial markets, socionomics proposes that the result is non-rational valuation, Elliott wave patterns, and—at certain points in those patterns—manias and crashes.

Lorenz et al’s study asked participants various questions, each with a factual answer. For example, one question was, “How many murders were registered in Switzerland in 2006?” The researchers asked the participants the same question five times via a computer system that recorded all the answers. 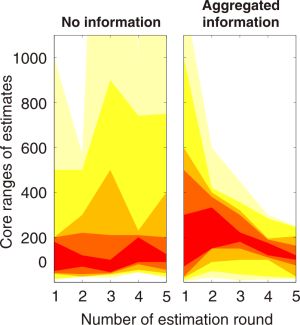 The authors noted, “the wisdom-of-crowd indicator tends to decline over time under conditions of social influence. This effect is substantial and statistically significant for all questions.”4

In other words, when social influence was introduced, formerly independent individuals herded more tightly each time they reconsidered a question, and the benefit of aggregating multiple estimates was lost. The degradation of WCE occurred even though the survey questions had a factually correct answer.

The authors wrote, “Presumably, herding is even more pronounced for opinions or attitudes for which no predefined correct answers exist.” We wholeheartedly agree with the authors. Prechter and Parker argued in 2007 that herding becomes far stronger with respect to financial-valuation questions—which have only subjective answers. In “The Financial/Economic Dichotomy in Social Behavioral Dynamics: The Socionomic Perspective” (2007), authors Robert Prechter and Wayne D. Parker posited that humans naturally tend toward consensus—especially under conditions of uncertainty—because they have evolved to herd as a primal survival tactic. The Law of Patterned Herding describes crowd behavior in situations where social influence supersedes individual reason:

Social systems comprising homogeneous agents uncertain about other agents’ valuations that are critical to survival and success provide a context in which an endogenously regulated aggregation of unconscious herding impulses constitutes a pattern of social mood, which in turn motivates social actions.5

Herding may facilitate individual survival in the evolutionary sense, but it can wreak havoc in the social arena. William H. Whyte in 1952 coined the term “groupthink,” which he described as “rationalized conformity—an open, articulate philosophy which holds that group values are not only expedient but right and good as well.”6 Research psychologist Irving Janis tied groupthink to a number of American foreign policy disasters and other faulty decisions in history. Groupthink suppresses both the expression and subsequent evaluation of non-core views.

When the Wisdom of Crowd Effect Fails
The WCE becomes less useful or disappears when estimates converge due to herding. Groups tend to coalesce around select but uninformed opinions and develop increased confidence in those opinions.

Why does this happen? One reason is that WCE is a statistical phenomenon, not a social/psychological effect. The authors wrote, “As social influence among human group members may trigger individuals to revise their estimates, it can have a substantial impact on the statistical wisdom-of-crowd effect in societies.”

It is not rational for an external observer to rely too much on the wisdom of crowd effect when the group is under social influence, especially with respect to certainty about the fact that the aggregate outcome is central in the cloud of estimates.3

When the Wisdom of Crowd Effect Works
WCE is useful when individuals form estimations independently. Heterogeneity of opinion, according to the authors, “generates a more accurate aggregate estimate than the estimates of single lay or expert decision makers.” Even this benefit, however, is limited to questions that have factual answers, as questions with subjective answers have no objective facts against which to measure accuracy. The study’s authors agree:

[C]onsensus formation has often been investigated for questions for which there are no well defined correct answers … . The herding effects created in this way prevent an objective measurement of quality. Therefore, such settings do not reveal whether social influence works in favor or to the disadvantage of the wisdom of the group.

How Herding Undermines WCE
The study’s authors describe three ways in which knowledge about others’ estimates narrows diversity of opinions and undermines WCE.

WCE in Finance?
Our socionomic model implies that social influence, opinion convergence and increased confidence about the direction of prices all intensify near significant turning points. This is why money flows, sentiment indicators and studies such as Frazzini and Lamont (2006) show that investors tend to buy late into rallies and sell near market lows.8

While extremely one-sided market opinion is slightly more prevalent during market advances, it is more focused at market lows, when fear and pessimism are also highly concentrated. Strong opinion convergence seems to be a better timing tool at lows than at highs. For example, Figure 2 shows that since 2000, the 30-period moving average of the S&P DSI (www.trade-futures.com), a poll of short-term S&P Futures traders, has dipped below 22 percent bulls eight times, each time an important low. This suggests that the strength of opinion convergence fluctuates with social mood and at multiple degrees of scale.

What This Means for Socionomics
This research demonstrates that interacting crowds produce and embrace erroneous conclusions. The undermining of WCE under social influence supports the socionomic premise that unconscious herding drives crowd behavior in financial markets, a context where both interaction and uncertainty are among the defining features of the landscape. Investors herd all the time, relying on rationalization over reasoning, the latter being the province of independent minds. Herding produces subjective valuation, which is subject to swings in social mood.

In the past decade, researchers have more frequently questioned and tested traditional financial and economic ideas. Their results have produced a succession of new findings consistent with socionomic theory. The study by Lorenz et al is an important contribution to this growing body of knowledge.■