The November issue of The Socionomist reiterated that major bull markets evoke historic apologies for the inhumane actions undertaken during previous bear markets, decades or even centuries past. Major bear markets, on the other hand, inspire retaliation for those same activities. 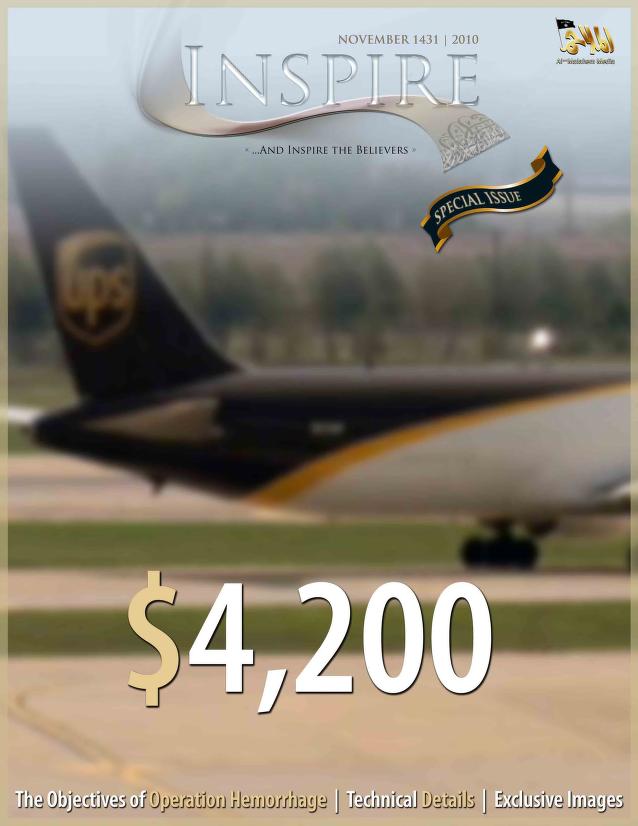 If social mood has begun a decline of Grand Supercycle degree, as the publications of Elliott Wave International have forecasted, it is no surprise that the era of historic apologies is yielding to a new era of historic retribution. The conflict between al Qaeda and the West expresses this tendency very dramatically.  Consider the following quote from Inspire, al Qaeda’s online recruitment magazine, describing the bomb packages it recently placed on airliners:

This current battle fought by the West is not an isolated battle but is a continuation of a long history of aggression by the West against the Muslim world. In order to revive and bring back this history we listed the [invented] names of Reynald Krak and Diego Diaz as the recipients of the packages. We got the former name from Reynald de Chatillon, the lord of Krak des Chevaliers who was one of the worst and most treacherous of the Crusade’s leaders. …The name we used for the second package was derived from that of Don Diego Deza, the Inquisitor General of the Spanish Inquisition … .1

Bear-market bitterness has a long memory! And if these events, which occurred in the twelfth and fifteenth centuries, are already rallying points for terrorists, they will generate even more retribution as social mood declines further. Will the TSA anticipate the terrorists’ next proactive strategy? Probably not, because governments and their agencies are reactive by nature. Like the Federal Reserve, which has followed every move of the bond market in setting its interest rates (Figure 1), the TSA has reacted to each new al Qaeda strategy—box cutters, shoe-bombs, liquid bombs, underwear bombs—with new security measures. Just as the Fed was unable to anticipate or prevent the financial crisis, so, too, the TSA will not see the next terrorist strategy in advance.

The trend of its increasingly intrusive body searches may not be over: In August 2009, in an attempt to assassinate the Saudi Deputy Minister of the Interior in Jeddah, Saudi Arabia, a suicide bomber detonated a powerful explosive concealed in his rectum. In reaction to such tactics the TSA’s “pat downs” may eventually become even more invasive and generate even more protests. The war on terror is resulting in an increasing loss of personal freedoms. Patrick Porter of King’s College describes this war as an overactive “containment policy:”

This means using our (depleted) wealth, our (reduced) military and our (dubious) confidence that we know what is good for others. Containment means surgically rescuing failed states, or preventing their failure … . it generates expensive and protracted commitments.2

Meanwhile, Inspire blatantly features pre-deployment photos of al Qaeda’s bombs, and their “Technical Details” article displays a sophisticated understanding of current airport screening equipment and describes how easily terrorists exploit its flaws. They also claim responsibility for UPS Airlines’ first-ever fatal crash on September 3, 2010, in Dubai. Al Qaeda has the advantage of low costs on its side. Its terrorists may not understand the socionomic origins of their own anger or of today’s fearful climate worldwide, but they do recognize and leverage that fear to inflict maximum damage with minimum investment. The recent ink-cartridge bomb that UAE authorities discovered on an airliner in Dubai illustrates the lopsided economics of terror. Inspire describes al Qaeda’s Operation Hemorrhage, the strategy that disrupted international air cargo for days:

This is what we call leverage. A $4,200 operation will cost our enemy billions of dollars. In terms of time and effort, three months of work for a team of less than six brothers would end up costing the West hundreds of thousands, if not millions, of hours of work in an attempt to protect itself from our packages of death.3

As governments wrestle with how to stop terrorism, other displays of possible future aggression around the globe are visible in the recent clash between the Koreas and in Russia’s late-November threats to renew the nuclear arms race. A November 30 Wall Street Journal article says the U.S. believes Russia has “moved tactical nuclear weapons closer to its border with NATO countries in Europe … .”4 And, if social mood is significantly lower a few years from now, escalating conflict around the world could make al Qaeda’s Operation Hemorrhage look minor by comparison.

1 The objectives of operation hemorrhage. (2010, November). Inspire, 1(3), Retrieved from http://www.archive.org/stream/INSPIRE_ISSUE_3/special#page/n0/mode/2up

2 Porter, P. (2010, November 15). The military is not a surgical tool of political engineering. Guardian, Retrieved from http://www.guardian.co.uk/commentisfree/2010/nov/15/we-may-never-destroy-al-qaida